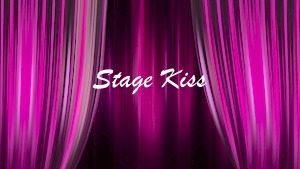 Stage Kiss, a splendid piece of theatre that we saw at the Bauer Theatre the other night, addresses a question I have always wondered about.  I don’t mean:  how do characters in the Fast & Furious movies keep walking away from car crashes that should have landed them in the emergency ward, or the morgue?  Rather, how do actors in a romantic comedy kiss on stage and make it convincing?  Or more to the point, how do two actors kiss one another on stage without the stage kiss becoming a real kiss?  And what if the two actors are genuinely attracted to each other, even if they don’t realize it or don’t want to admit it?  How do they keep those stage kisses, repeated night after night in every performance, from becoming something more?  Stage Kiss entertainingly delves into this question, and much more besides.

Two stage actors (their names never given) were once briefly, passionately, tumultuously in love.  That was eighteen years ago though, and she has moved on to a sensible husband and a teenage daughter while he has moved on, sort of anyway, to a tentative relationship with a kindergarten teacher.  When they find themselves cast as the leads in a truly awful, 1930s melodrama at a regional theatre in Hartford, they discover that, the passing years notwithstanding, the fires of passion have not really died.  Though the pair bicker and growl on the set, the stage kisses become increasingly real.  That idea would be enough to power a typical Norm Foster comedy, but in Stage Kiss it doesn’t even take us to the intermission.  Sarah Ruhl, the playwright who created the weirdly thoughtful Eurydice (produced by Theatre Antigonish last season) has much more to say.

At one level, Stage Kiss is a romantic comedy about relationships and the life-defining choices we make between duty and desire, sense and sensibility.  Should she run off with her first love, or stay with her stable and supportive husband?  At another level though, it is theatre about the theatre.  The actors portray actors, except for Jeremy Webb, who gently underplays the world’s most directionless director (“just go with your instincts.”).  But the actors also play actors playing actors in a theatre piece.  So sometimes they are acting and sometimes they are acting at acting (and doing so with enough ham to feed a thousand family dinners).  Not coincidentally, the plot of the melodrama within Stage Kiss re-iterates the themes of the play itself.

This layering is cleverly used to explore another question.  Not the big question of why the Imperial Storm-troopers on Star Wars wear that clunky white armour when it doesn’t seem to protect them against anything.  Or even, why don’t triumphant villains just shoot James Bond and have done with it?  Rather, when are we truly ourselves?  When are we projecting our true personalities to the world, and when are we pretending instead, acting at being ourselves?  There are moments in Stage Kiss when the characters in the main storyline, which isn’t about a play, suddenly behave as if they were in a play.  These surprises include an unexpected performance of Some Enchanted Evening in the midst of a confrontation with a jilted husband.  Were they in a play all along?  Do they even know if they are in a play?

Stage Kiss leaves the viewer with all sorts of interesting questions, but dullards like me can still enjoy it as entertainment.  The delivery is fast, funny and light.  Christian Murray and the inestimable Francine Deschepper play the conflicted couple at the heart of the play, and they are supported by strong supporting performers, most playing two parts, in typical Festival Antigonish style.  I especially liked Jennifer Roberts, who portrayed a smiling, chipper young actress in the first act and the female lead’s sullen, angry daughter in the second act, making both characters seem real.  Anyway, first-year Theatre Arts analysis aside, I recommend Stage Kiss.  It’s a pretty good example, in my humble opinion, of what theatre is all about.

Still time to catch all three plays: The Hound of the Baskervilles, Kingfisher Days and Stage Kiss, before the season ends.